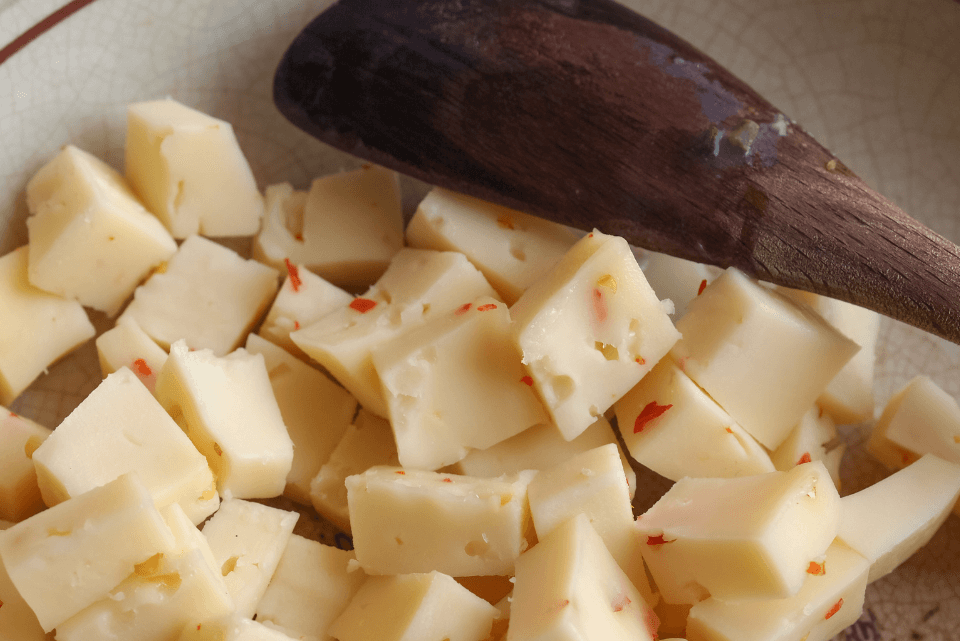 For those wondering what kind of cheese is pepper jack, it’s a semi-soft cheese that was invented by Mexican Franciscan friars of Monterey, California. As the name implies, pepper jack cheese is a variant of Monterey jack cheese. You may hear people refer to pepper jack as simply “jack” or “jack cheese.” It’s available in blocks or snack-sized portions at the supermarket.

Pepper jack cheese is easily recognizable, thanks to the red-tinged peppers and spices all over its surface. And like other low-carb cheeses, pepper jack cheese fits into a keto diet. It has less than 1 gram of carbs, 8 grams of fat, and 7 grams of protein per slice (or 1 oz).

What is Pepper Jack Cheese Made Of?

Pepper jack cheese is made by adding bits of different herbs and spices, such as jalapeños, sweet peppers, habañero chilies, rosemary, and garlic. If you make pepper jack cheese at home, you can use whatever peppers you like depending on your taste preference.

As for pepper jack cheese taste, it has a peppery and buttery flavor due to the combination of cheese, plus spices. This complex flavor is the reason why pepper jack pairs well with a variety of foods and dishes, boosting their taste. Because it melts easily, it’s great for dips and sauces.

But is pepper jack cheese spicy? Yes, it has a spicy and fiery flavor that adds heat to any recipe. However, the spiciness varies from one cheese to another depending on the amount of spicy peppers added. Note that pepper jack isn’t the only spicy cheese out there — other variations include habanero cheddar, sriracha cheddar, jalapeno muenster, and chipotle gouda.

Is Pepper Jack a Healthy Cheese?

Any natural or unprocessed cheese is good for you, including pepper jack. Pepper jack is packed with protein and fats, making them an excellent addition to a diet that helps with weight management and boosting energy levels.

Like with other high-calorie foods, it helps to know how much cheese to eat based on the number of calories you need each day for weight maintenance or weight loss. For pepper jack cheese, 1 ounce provides 106 calories.

But here’s the best part: When you’re on a keto diet, you won’t need to constantly keep an eye on your calorie intake. This diet is so satiating (thanks to fat and protein) and very low in carbs, you’ll naturally cut calories without even noticing.

There are a ton of ways to incorporate pepper jack into your diet. Start with sweet and savory recipes that involve cheese, such as cream cheese cookies, crusted salmon, pasta, soups, and omelet. Have fun using pepper jack as an alternative cheese in dishes in case you run out of cheddar or parmesan cheese.

For avid snackers with busy schedules, pepper jack doesn’t have to be taken off the list. At Käze, we offer pepper jack cheese bites made from real pepper jack. Our cheese bites come in a resealable bag to keep them fresh when you’re snacking all day.

What is a Good Substitute for Pepper Jack Cheese?

Pepper jack cheese is healthy and injects spice into any dish. As a dairy product, it’s high in protein and fat, and low in carbs. You can make your own pepper jack any way you like or get it at your local supermarket. Opt for Käze Pepper Jack Cheese Bites that pack a punch of flavor from crushed chili peppers if you’re always on the go. Is Blue Cheese Good for You?